yep, another of our generation has died. indeed steve like richard rohr....'inside' yet so edgy.... one's heart wants to announce to all at the memorial, and beyond: best way to honor this man-- cry for the permanent opening of all the doors of local jails as well as the five local military bases.  then throw the door-keys into metal-recycling bin, and begin conversion/re-training of all the thousands of workers, students, etc. to life-affirming work...

These two quotes bring a smile to my face. Theological to the core and yet comical, one from the sacred scriptures, the other from my brother Peter, living in Colorado Springs, CO, grieving the loss of the esteemed leader of their Bijou House, an intentional Ecumenical Christian Community. Stephen Handen, former Roman Catholic priest, died peacefully on July 12, day before yesterday with wife and family at his side. Peter’s sentiments obvious, typed in his fast and furious style with full stops and capitalization details ignored. It is about his very good soulmate friend – a giant of a visionary who has passed on. This is about a faith community that grew in spite of the Church. Members of the Bijou were ‘all in’ with all things in common and shared and distributed as per the needs around them (Acts 2:44-45) including the common mission to confront the evils of militarism. 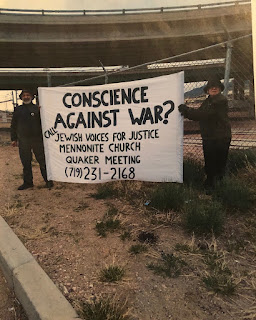 My intrigue is with this occasion of grief – funeral mass as per protocol in the local Parish and yet responses and condolences from society’s full spectrum of sinners and saints, believers and unbelievers. Many years ago a young priest was found to be in violation of the celibacy vows required for ordination as a catholic priest – and accordingly defrocked. He then continued a visionary ecumenical community ministry for another fifty years, nurturing and managing radical faithfulness along with other idealists, this ministry including a land trust for the homeless, soup kitchens, bicycle repair shop, Bible studies and university lectures, and even a memorial garden in his backyard for the ashes of many homeless who regularly expired in their Springs neighborhood.

And, get this, all the while faithfully attending mass and worship within the church that had defrocked him! This was in direct contrast to a number of other ‘victims of the institution’ who were partners in this community ministry. Unable to endure the complacency of today’s American churches, this faith group was into radical activism, still akin to the hippy anti-Vietnam war attitudes of the 1960s and 70s. My brother, a seminary educated Mennonite, also in this group, makes observation of another ex-catholic priest in their community, but whose anger at ‘the church’ forbade him darkening its doors. A great variety even within this community!

I could now go on and on with many anecdotes of experiences my brother and his wife Mary have encountered (initiated?) in their humble abode in that town among these people. My thinker (yes again 😊) must now venture into a few theological morsels, reflections that come from my observations of that ministry in that country south of the 49th. The Matthew scripture above is regular fare in my faith community, the Mennonites, offspring of the Anabaptists of the 16th century Reformation.  My people the pacifists, the schwarmer, the spiritists, who were a pain in the butt for the dominant Church, claimed the full authority of ‘binding and loosing’ earthly decisions even if not sanctioned by Mother Church. Ironically mother church claimed big authority from the Bible verse immediately preceding the quote above. Only one verse prior is the other perspective. 18 And I tell you that you are Peter,[a] and on this rock I will build my church, and the gates of Hades[b] will not overcome it. (Matt 16:18). Catholicism requires order and authority derived from these words of Jesus bestowed onto Peter (and successors). The difference of course is in interpretation of the keys. Anabaptists claim authority from the Holy Spirit as provided by Jesus wherever two or three are gathered in his name, and the Roman Church derives authority from the designated head, the pope. My brother Peter’s folksy reference to recycling the keys into something useful has its full dose of irony – and of course agreement from his faith brothers the defrocked priests as well as the other brothers and sisters within their community.

Always, almost always (!) there is a little more to it. Those of you who read all my posts will remember “Good-Lifers” (May 10) which identifies some positive recent developments in the catholic church. I have an appreciation for the Church’s present-day efforts in South America, seeking to address some of the sociocultural damage to people and the rainforests incurred by aggressive extractive mining and corporate farming within ‘the lungs of the world’ most of which has historically been accommodated by the Church. The huge challenge is what to do about it now both ecologically and pastorally. Even as they make an effort it must be acknowledged this is a crisis not only for the Roman Church, but all peoples of faith, including us soft-spoken (?) Mennonite pacifists also benefiting from aggressive economies and modern militaristic governments.  Undeniably here is a challenge yet to be faced by the largest country on this planet with its largest military base just south of Colorado Springs.

Peace on Earth was the cry and the witness of the Bijou House. Peace on Earth will be their cry until the day that they all die. Peace on Earth is also the vision and the dream of an increasing number of modern agencies (nonprofits with fancy names and perhaps, perhaps not, affirmed by churches), but the keys will need to be of recycled material, fully retooled by the One who was, is, and is to come.

Posted by Jacob C Froese at 8:35 PM No comments:

Here follows what I would call a seasoned article. It has sat in my computer “writings” for a while - wrote it about two years ago. Upon rereading it several times last couple of days I discovered I cannot ignore it. It’s about a friend of mine - interesting guy. His faith is both unique and ordinary. I am intrigued by his vantage to ‘doing’ things, different than many of us who do things only because of routine or carefully considered and planned for such and such reasons, etc. etc. –  along with budget implications of course!  As neighborliness, churchiness, interfaith and political morality and pandemic recovery is front and center on my mental and spiritual burner these days (yes, my thinker 😐), I offer this little piece as something germinal – perhaps of good use to myself and to those of you who read here.

We were a group of men, all gathered at the home of one of us. Peter is an extraordinary guy, a young retiree who has many involvements including, together with his wheelchair-bound wife, parenting three energetic young adult sons, participating in church life, managing neighborhood activities, etc.

This was a second meeting which he has felt inspired to call; breakfast at his house. “Why not”, he says, “Costs you 16 or 18 bucks just to sit at a restaurant and talk about nothing.  Here no charge, and you may get to actually talk about … something.”  Good point Peter.  Last time three of us showed up; this time fourteen!  Peter was elated, thanked us repeatedly for coming and occasionally looking at the swelled numbers, “Be careful what you pray for”.  LOL.